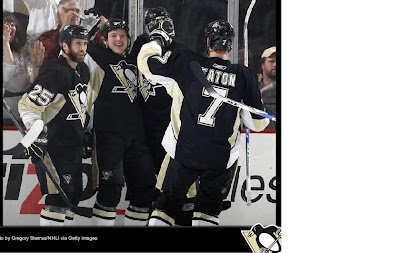 Posted by Hooks Orpik at 3:01 PM No comments:

Everybody into the car, we're moving! 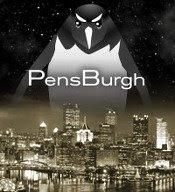 Like most the rest of the hockey blogging world, I'm joining the fine folks at Sports Blog Nation....Pensburgh is a great place and I hope to add to it.
TST will always be around, but my new pieces will be on Pensburgh. Thanks to everyone who ever stopped by, commented and gave me fedback. I've enjoyed every moment of it.
Posted by Hooks Orpik at 9:41 AM 8 comments:

The Penguins won't make the playoffs...

We've always wanted to do something in the vein of the brilliant "Fire Joe Morgan" ilk but have never really found the right ammunition. But then our old friend the Peerless Prognosticator, looked into the crystal ball and saw the following when he asked himself 12 questions...So what are questions without answers, right?

11. Will the Caps meet the Penguins in the playoffs?

The short answer to this is…”no.”

The long answer: the Caps are 1-5 in the playoffs against the Penguins, so hopefully the team that hasn't won a playoff series in over a decade doesn't run up against their historical and more experienced nemesis.

Because one team will lose early? Like the team that lost early last year? Tell us!

Because the Penguins are the kind of mess in the same way that a room of furniture bought from eight different stores is a mess.

Oh, I thought it was because the Penguins were currently out of the playoffs if they were to start today. Which they don't. And Pittsburgh is only a whole point out of 8th place.

Maybe it is because they are a mess of furniture though.

The pieces don’t seem to fit coherently to make for a long, successful run of wins.

But, you know, other than that they can't really be expected to make any long, successful runs.

Do they match Crosby and Malkin on a line, or do they split them up?

Crosby and Malkin are 1 and 2 in the points race. Malkin, in particular, has shown that he can be effective as a winger on Crosby's line or centering a "second" line.

Together or apart, they make plays. Whether or not they are on the same line seems like a bigger concern for how the opposition sets their checking lines and defensive pairs.

When is Gonchar coming back?

About 2-3 weeks, which is a little ahead of the original prognosis.

What winger can they match with Crosby to get any production?

Evgeni Malkin, Tyler Kennedy, Petr Sykora or whoever they add at the trade deadline.

And who are they looking to add production to? Crosby has 45 even strength points this season--second in the league only to Malkin's 51. They've rotated no shortage of players with Sid (like Malkin, Kennedy, Max Talbot, Pascal Dupuis, Matt Cooke) and Crosby has put up numbers. Whoever is playing hot gets their shot on the top line, and Crosby usually comes through with them.

What happened to the power play (tied with Tampa for 23rd overall and dead last in the NHL on the road)?

The loss of Gonchar, who was #2 in the entire league with 46 power play points last season. The next highest defensemen (Nicklas Lidstrom and Mark Streit) had 34 PP points. Gonchar also led all players in the NHL with 38 power play assists.

Given that he's played a grand total of 0 games this season the lack of power play success comes a little bit more into focus.

What happened to Fleury (he’s saved fewer than 90 percent of the shots he’s faced in nine of the last 16 games he’s played)?

Do Crosby and coach Michel Therrien not get along?

Will – or when will – Therrien be fired?

Barring an extended, extended losing streak, no time this season.

The Penguins have, as they say, “issues” that go far beyond a Stanley Cup hangover.

Uhh, it's February. No one on the team is thinking about last season, they're focused on this year.

And as mentioned, of this writing one point of of 8th place (though other teams do have games in hand). One whole point, time to turn it in for the season! They're so hungover they're practically still drunk. Jordan Staal hasn't been this hungover since the day after his brother's bachelor party!

Even Barry Melrose, who would know the specie (having seen one up close coaching Tampa Bay this year), said that the Penguins aren’t a very good hockey team.

Even Barry Melrose! Well that solves it! No chance at all the Penguins could get to the playoffs now if the esteemed Barry Melrose thinks they aren't a very good hockey team. Because surely has he ever erred in his hockey judgement.
Posted by Hooks Orpik at 2:09 AM 2 comments:

Labels: did this all in love, fire joe morgan style, hope peerless doesnt get salty, someone could probably pick apart any number of my posts, yay for pittsburgh boo for washington

Beating back the Blue Jackets...Pens win 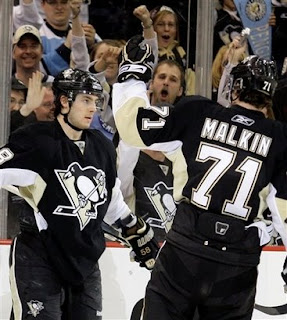 For only the second time since November, the Penguins have won consecutive games. Going down the stretch this is going to have to change if they want to sniff the playoffs. But, as of now, the playoffs have really started...

Now that this stretch is over the Pens are rewarded with the top two teams in the Western Conference, the Red Wings and the San Jose Sharks--though both games at home. Let's see how they stack up against the best.

Posted by Hooks Orpik at 1:47 AM No comments: 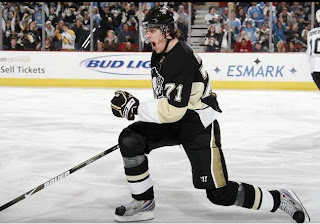 Not going to lie, we had a huge hate post written up basically writing off the rest of the season barring some sort of drastic action taken by Ray Shero. Down 3-0 against Tampa Bay at home, we almost turned the game off. But then Evgeni Malkin put the team on his back at stole the Pens a point.
Sidney Crosby's knee isn't right. Take that to the bank. He's pushing through, but one can tell he isn't himself. So someone had to step it up. Which leads us to the title of the post; did Malkin just save the season? Down 3-0 going in the third. Against a weaker team in the standings, at home. Facing a goalie in his opening NHL start that was in a groove. Down three points (at the time) to the playoff chase--with the rest of the teams in the chase having more games in hand. If the Penguins rolled over and died, better believe that's about the picture wrap on the season.
So how do you measure MVP? Caps fans are already forming their arguments--and with good reason--Alex Ovechkin has more goals than anyone in the league and is setting the tone for what will probably be record wise one of the best teams in the first 82.
But....
2 goals, 1 assist (all in the 3rd period), 7 shots on goal (with two more missing the net and two getting blocked), a takeaway, a blocked shot and 4 hits...One that knocked a key defenseman out of the game. That, folks, is an MVP performance. Sure the Penguins are still outside of the playoff bubble and it's hard to win the trophy if you don't lead your team to the second season that over half of the league makes, even if Malkin retains his 17.9% point advantage over AO.
But....
Remember this night. Remember this performance. If, as this editor thinks, it breaks the floodgates for the rest of the team and the Penguins rally from here, then you will know.
Other thoughts:

And take a deep breath, the Pens live to fight another day.

Posted by Hooks Orpik at 9:22 PM No comments:

Mr. Kennedy to sit one out, Caputi called up

--For the second time in under a week, NHL disicplinarian Colin Campbell rung up a Penguin; this time it's Tyler Kennedy one game for leaving the bench to engage Toronto's Luke Schenn in a fight. It's unknown if Mr. Kennedy would have gotten a longer timeout if he hadn't gotten wiped on the ice by Scheen.

--In personnel moves, the Penguins have called up their brightest prospect from the minors; Luca Caputi. Paul Bissonnette has been re-assigned. Caputi has 13 goals (and 35 points) in 46 games down in the minors, not bad stats for a 20 year old. It will be interesting to see how he fares, here's to hoping that Michel Therrien doesn't give him the usual 6-7 minutes for most young callups.

--Two interesting tidbits from Pensburgh: Sergei Gonchar takes another step on the road to recovery by being cleared for contact in practice. And Ray Shero indicates the "expectation" management has for the players to "make a push". It sounds like a trade could be coming soon, possibly when Sarge can return. As we've mentioned before, signs are pointing that Alex Goligoski could be the bait.

--Sad story from Montreal, as former Penguin Robert Lang suffered a pretty gruesome career threatening achilles injury. The surgery was said to be successful, so that is a good thing. Here's hoping that Lang, an avid golfer, is back to the links at some point when the weather gets warm. And back to the NHL too.

--It would be a shame if Lang's career ended in this eye-popping jersey, eh? 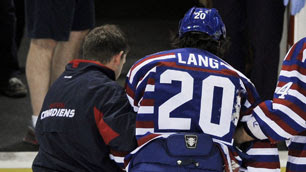 --Congrats to Sidney Crosby, who was named the NHL's second star of the week...Penguin killer Jamie Langenbrunner was named the league's top star.

--A quick check of the standings don't show much progress, as a 1-1-1 record out of the break woud indicate. The Pens are in 10th in the conference; Florida is in 9th--one point up on the Pens (with two games in hand). Carolina is clinging to 8th place with two more points than Pittsburgh.